During the months of July and August of 2004, impromptu discussions were had between Sir Knights Kevin E. Fair, Anthony R. Pugh, Kirk D. Washington, and David Mayo regarding the Cryptic Degrees. As years passed, these discussions continued and even intensified, to include others familiar with the work as well as the necessity in properly completing the “Circle of Perfection.” We knew that there were other jurisdictions practicing the Cryptic Degrees as an independent entity and saw no legitimate reason why we could not and should not do the same. During this period, discussions were made with Past Eminent Commander Joseph S. McFadden, Sr. (PGM), Past Eminent Commander Obie S. Ellison (PGM) and Past Eminent Commander Albert W. Hale. All also affirmed that it is a necessary part to the York Rite and should be practiced as a separate department.

In August 2010, the Supreme Most Eminent Grand Master Anthony R. Pugh of the General Grand Encampment of Knights Templar appointed Sir Knight Kevin E. Fair as the National Coordinator for the Cryptic Degrees. He assigned several of his elected officers to assist in the organizational process for local Councils in varied states/regions. Local Councils were formed commencing in 2011(with the written approval of the Jurisdictional Grand Masters) in New York and Illinois, and they began to vastly increase their respective memberships.

Between 2011 and 2012, Empire State Grand Council of New York and Josiah Grand Council of Illinois were organized. As “Cryptic Masonry” continued its growth, in 2014, Houston Texas was the next explosive city. Shortly thereafter, Shamgar Grand Council of Texas was formed. This led to the discussion of a Supreme Cryptic Council within our affiliated Supreme Departments. After a meeting with the respective Grand Officers from the varying states, in April 2014, the General Grand Council of Cryptic Masons of the U.S.A. was organized.

On August 13, 2015, the General Grand Encampment Knights Templar of the U.S.A. under the leadership and authority of the Supreme Most Eminent Grand Master Anthony R. Pugh, supported by his Deputy Grand Master – Right Eminent Kirk D. Washington and the officers and members did grant a CHARTER to the General Grand Council of Cryptic Masons of the U.S.A. Inc. empowering it to work as an independent York Rite Department. The three principle officers of this new entity were: Companion Kevin E. Fair – Supreme Most Puissant Grand Master, Companion Richard Ashford – Supreme Deputy Grand Master, and Companion Rickey Fillmore- Supreme Grand Principal Conductor of the Work.

This General Grand Council has been continually moving forward with fervency and zeal. It is our fervent prayer that as we progress in this Masonic work, we are a continued helping hand to others, less fortunate than us.

A GENERAL HISTORY OF THE CRYPTIC DEGREES

It is purported that Cryptic Masonry is founded upon theory, traditions, and legends (history).

Some subscribe to “The Stuart Theory.” In his book, History of Freemasonry, J.W.S. Mitchell, “introduces the idea of the Cryptic degrees being used as a cover under which the adherents of the House of Stuart could meet and plot to recover the Throne of Great Britain.

According to this theory, the Royal Master is the claimant to the Throne of Great Britain. The Lost Word is the Lost Cause, the Secret Vault, the Secret Place in which they carried on their work for the revival of their cause. Within this vault, the Word, symbolizing the Cause and efforts for its revival was to remain hidden until the time was ripe for it to be revealed.

Under this theory, the Select Master Degree symbolizes the plan of Charles Edward Stuart, also known as the Young Pretender, under the title of James VI. He and Louis XVI, the current King of France are the two Kings represented by Solomon and Hiram of Tyre, together with the Earl of Mars and Nithsdale and 23 others from Gaul forming the 27 that composed of the Conclave. These were the men who were laying the foundations of the return and subsequent reign of the Young pretender in secret. Remember that the word “select” was applied primarily to the individual Mason and not to the degree itself, it is the individual that is choice or select. The Select Masters were the true and tried Companions of the Young Pretender and his cause.”

Others may subscribe to the History of the Establishment of the Council Degrees in America, from Cryptic Masonry, written by Albert G. Mackey, M.D., published in 1867. Excerpts from this reading are as follows:

“Forty years ago (1827), there were very earnest discussions on the subject of the origin and jurisdiction of the degrees of Royal and Select Master. At that time, there were three authorities under whom those degrees were conferred in the United States. First, under Grand Councils in some of the States, secondly, under Grand Chapters, as in Maryland and Virginia, and thirdly, under the Supreme Council of the thirty-third degree of the Ancient and Accepted Rite, in South Carolina. This diversity of authority was undoubtedly dependent on an uncertainty of origin. The degrees were here, but few knew whence they came, nor by whom they had been originally introduced.

In February, 1827, a committee of most able and competent Companions made a report on this subject to the Grand Chapter of South Carolina, in which the history of the origin of these degrees is so fully discussed, that the valuable information it imparts had better be given in the very words of the report itself:

“… that they have made extensive and careful investigation into the subjects referred to their consideration, and they offer the following statement as the result of their inquiries:

“They have ascertained that the respectable brothers and companions, Dr. F. Dalcho, Dr. Isaac Auld, Dr. James Moultrie, Sr., and Moses C. Levy, Esq., with many others, received these degrees in Charleston, in February, 1783, in the Sublime Grand Lodge of Perfection, then established in this city (Charleston), of which body three of the above named brothers are still living, venerable for their years and warm attachment to the glorious cause of Freemasonry, and highly respected and esteemed in the community where they have so long and so honorably sojourned, and they are still members of the same sublime body. “

“Your committee have further ascertained that at the original establishment of the Grand Council of Princes of Jerusalem, in this city, on the 20th of February 1783, by the Illustrious Brothers Joseph Myers, Barend M. Spitzer, and A. Forst, Deputy Inspectors-General, from Frederick II, King of Prussia. Brother Myers then deposited in the archives of the said Grand Council of the Princes of Jerusalem certified copies of the said degrees, from Berlin, in Prussia which were to be under the future guidance and fostering protection of the government of the above-named presiding body. The above-named three respectable brethren and companions are, and have steadily been, members and officers of the said body of Princes of Jerusalem; their evidence therefore must be conclusive upon these points.

Finally, the Rev. Frederick Dalcho, who was at one time Grand Commander of the Southern Supreme Council, in the appendix to his “Masonic Orations” published in 1803, after giving a list of the regular degrees off the Ancient and Accepted Rite adds, that “most of the Inspectors are in possession of a number of detached degrees given in different parts of the world, and which they generally communicate, free of expense, to those brethren who are high enough to understand them.” And among these “detached degrees” he mentions “Select Masons of 27” which is what we know call the Select Master.

From these statements, then, we gather the following results as to the history of the introduction of those degrees into the United States.

In this manner the control of these degrees has been gradually but permanently taken from the Supreme Council of the Ancient and Accepted Rite, and they have now become a constituent part of what is beginning to be called the American Rite, to which, indeed, they properly belong, since they are absolutely necessary for the proper illustration of the Royal Arch degree.

The connection of the degrees of Royal and Select Master with the Ancient and Accepted Rite, will readily account for the resemblance which is found in these degrees, in phraseology and symbolism, to that Rite. Their legends, however, assimilate them more closely to the Royal Arch of the York and American Rites, than to the corresponding Knights of the Ninth Arch of the Ancient and Accepted Rite. Hence, in making them the eighth and ninth degrees of the American Rite, it must be admitted that Masonic ritualists have put them in the right place.

It is also widely stated that, the possible existence of the Cryptic Degrees as we know it, is attributed to 4 men, namely- Stephen Morin, Henry Andrew Francken, Moses Michael Hayes and Joseph M. Myers. Certainly, there were major contributions made to this work by Henry Wilmans, Thomas Lowndes, and Philip P. Eckel.

Our mission is to promote and advance the Cryptic Degrees nationally through education, effective leadership and guidance that Dares to be Different; all while illuminating the legitimacy of the Cryptic Council within our York Rite Bodies. Additionally, our work is in careful symbiotic agreement and promotion of our Adoptive Rite, the Ladies Circle of Perfection. 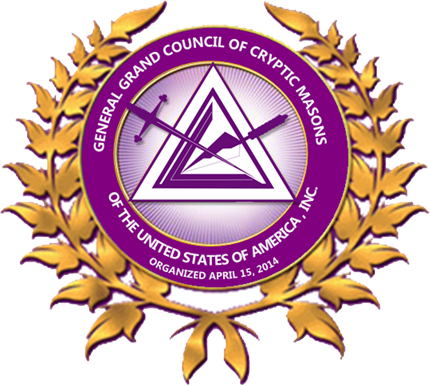